Eight new users join TikTok every second. TikTok's growth has exceeded any and all expectations for the once teen lip-syncing app. Keep reading for 10 TikTok stats for 2022. Unless you’ve been living under a rock, you know that TikTok is one of the fastest-growing social media platforms in the world. The TikTok stats continually outperform almost every other mobile app and social media platform. This explosive growth has drawn attention away from the tried and true platforms such as Google, Meta, and Snapchat as TikTok is now the most downloaded app of 2022.

TikTok’s demographics have also evolved, with older generations checking out the app to see what it’s all about, influencers turning into content creators, and brands discovering the viability of TikTok advertising. New content trends have developed including lip-syncs (migrating their lip-syncing predecessor Musical.ly in 2018), comedic sketches, and special effect filters. TikTok is also a place of visual discoverability as it’s overtaken Google Search in the eyes of Gen Z users. All of these elements combined have changed how brands approach their social marketing stack – particularly in relation to how ad spend is allocated. TikTok has earned its seat at the table with its platform counterparts and continues to force them to adapt to the changing social sharing landscape.

We’re big believers in TikTok as a component of any performance and growth marketing strategy whether that is focused on an organic presence or paid ad strategy. Now, let’s look at some data to back up our excitement for the platform. Here are the ten TikTok stats you need to know in 2022.

1. TikTok’s userbase is aging up

47% of TikTok users are between the ages of 10 and 29 compared to last year’s figures of 62%. TikTok’s core demographic isn’t just for dancing Gen Z-ers anymore as more mature generations are joining the platform in throngs while the main demographic continues to age. Don’t get us wrong, lip-syncs and dancing videos still exist by the millions, but the growth of TikTok has resulted in the growth of several new trends in the types of content that people are creating.

New verticals have exploded in popularity across the platform, such as cooking, beauty & fashion, #cryptok, and #fintok. Even celebrities have started getting involved, with stars such as Kevin Hart, Lizzo, and most recently Kim Kardashian (who gained over 3 million followers in just 15 hours) all becoming active users within the TikTok community. The latter has undoubtedly helped grow the platform, with users signing up to see the latest updates from their favorite personalities. Still, the former has inspired countless content creators to either get started or shift from a previous platform (YouTube, Instagram) over to TikTok.

Arguably the biggest appeal of TikTok as a marketing platform is the ability to reach Gen Z at scale. While that age bracket is coveted for its ability to set trends, the risk is that they don’t have the buying power to justify substantial investment in marketing spend. Who cares if someone thinks a brand is cool if they don’t have the money to purchase it?

As mentioned above, the platform’s changing demographics show that’s not the case with TikTok as Gen Z ages and older generations get more comfortable with the platform. Brands can essentially get the best of both worlds— engaging the Gen Z trendsetters with fun challenges, and them spreading the word to more affluent audiences.

We said it once, but we’ll say it again – content creators are the new influencers and UGC is essential to any social strategy. TikTok’s Creator Marketplace is one of their strongest and most unique features for brands to partner with over 100,000 vetted creators. The TikTok Creator Marketplace API allows brands to view creators’ first-party data, analytics, and direct insight into their engagement to better pair with the best creator for their campaign goals.

4. TikTok Has Been Downloaded Over 3.5 Billion Times Worldwide

TikTok is officially the first non-Meta app (and the fifth app of all time) to surpass 3 billion downloads. In the first quarter of 2022, the app was downloaded more than 175 million times. In the U.S., TikTok has been the top app every quarter since Q1 2021 on the App Store and has seen a 19% year-over-year increase on the Google Play Store. 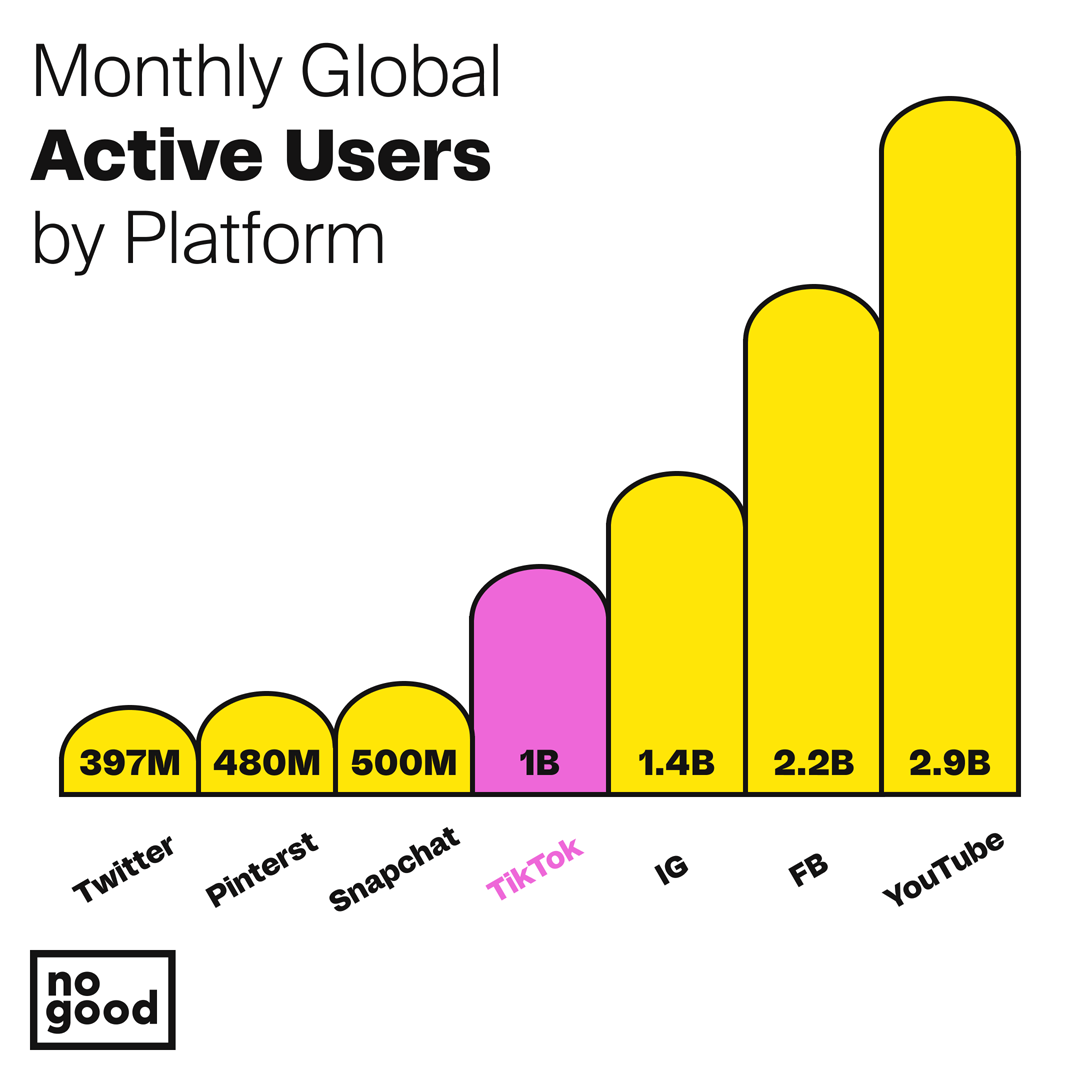 6.  Despite being banned in India, TikTok saw an 11% growth in Asia

It’s no surprise TikTok has had a hold on the Asian market. Known as Douyin in its home market, the app quickly gained popularity at home and abroad with 600 million active users in China daily. Despite its popularity throughout Southeast Asia, India has banned the app not once but twice due to controversial security issues. But despite losing this large market, TikTok has continued to climb and hold its #1 spot globally.

7. TikTok users in the U.S. spend an average of 38 minutes on the platform

Users in the U.S. are spending on average 38 minutes per day scrolling TikTok. Not only is TikTok being checked more frequently, but users are spending more time within the app as well. The average TikTok viewing session clocks in at 10.85 minutes which is over three times longer than the average Instagram session of 2.95 minutes.

It’s also worth noting that TikTok has arguably a better platform and algorithm for discovering new content too. The “For You” page opens upon launch, meaning the first thing you see isn’t content from the people you follow, but from other content creators that the TikTok algorithm thinks you’d enjoy. In comparison, the Instagram experience is based mostly on people you follow causing users to navigate to the Discover tab to explore suggested accounts. On Instagram, users need to go out of their way to find new content, versus TikTok users, who expect to see something completely new every time they open the app. 8. TikTok is a sound on experience

TikTok is a visual and auditory experience. In fact, over 93% of top-performing videos use sound. Brands that use songs and sounds in their videos see a 16.1% increase in engagement over videos that don’t use sound. In 2021, over 160 billion videos used TikTok’s popular text-to-speech automation feature which proved to be one of their most popular effects.

TikTok also has a powerful impact on the music industry. 88% of users report that music is critical to their TikTok experience. So much so, that in 2021 175 songs that trended on TikTok were charted on the Billboard Hot 100.

Unfortunately, business accounts only have access to commercially licensed songs, but the music library contains over 600,000 sounds and songs to choose from so this is hardly a hindrance.

9. 24% of marketers consider TikTok as an effective marketing platform

This is a 700% increase from the previous year when only 3% of marketers responded positively toward TikTok as an effective advertising platform. Though the ad spend on TikTok remains behind Facebook and Instagram, the Meta platforms’ global ad spend fell by 25% and 40% respectively.

10. TikTok is the top mobile app for consumer spend

Last year, consumers spent an astounding 2.3 billion dollars on TikTok. If you haven’t started advertising on TikTok, this is your sign! Consumer spending increased year over year by 77% and as TikTok rolls out even more in-app shopping features such as Storefront, product tags, and Instant Landing Pages, the social shopping spend is only going to grow. 37% of users have discovered a product on TikTok with 29% finding out the product they wanted to buy was sold out. Even when users don’t come with the intention of shopping, 67% of users say the platform inspires them to shop. 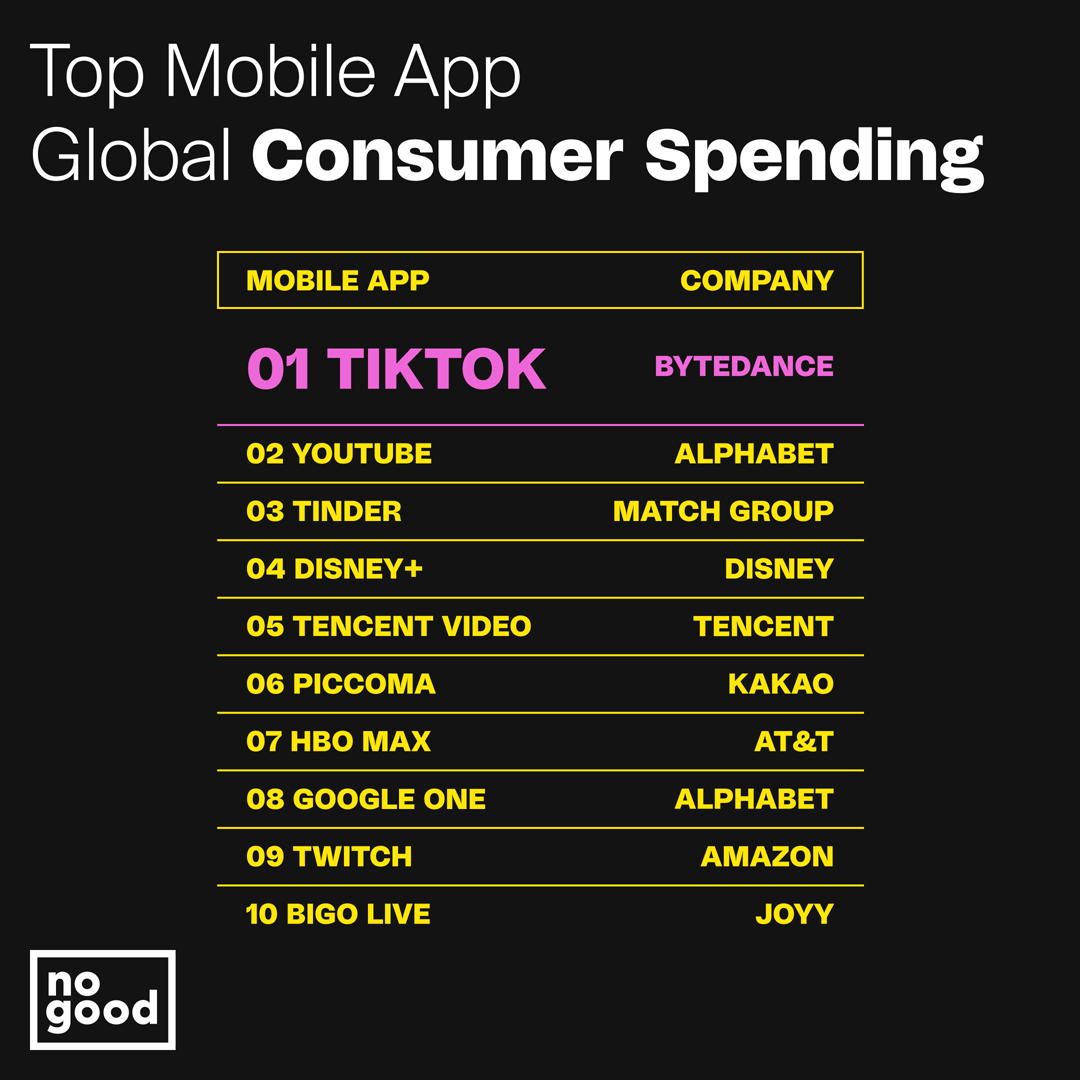 These TikTok stats emphasize the same overall theme –TikTok is more than a Gen Z social app, it is a prominent player within the media and marketing landscape. Not only is TikTok making a name for itself in the social media category, but continues to overtake in search and entertainment. TikTok is a force to be reckoned with as they continue improving its advertising features and user experience.

Check out some of our favorite TikTok brand examples and check out NoGood on TikTok!

Maura is a social media manager with diverse industry experience specifically rooted in the arts for some of New York’s most well-known theaters, top jazz musicians, arts management agencies, music and theatre non-profit organizations as well as luxury retail and private education.

Tiktok was the best platform from all other social media sites. I also loved to make videos on that for Tiktok marketing. but as of now, Tiktok is banned so can you please suggest me Tiktok alternative so that I can make videos on that? Thanks in advance. 11 strategies marketers need to be implementing for a cookieless future.
Julia Magdzinska
May 27, 2022 6 min read A guide on capturing and utilizing zero-party data to optimize your acquisition efforts. YouTube Shorts For Business: The Case For Value-Based Marketing

YouTube Shorts advertising capabilities are growing by the day, and is an environment better served to support creator partnerships, the sky's the limit.