Skip to Navigation
Harry’s Marketing Strategy: How The Men’s Razor Brand Dominated The Category
Talk to us

A full analysis of Harry's stellar launch and marketing efforts that turned them into industry leaders in a matter of months. As marketers, looking at past successful campaigns is an integral part of staying ahead of the trends and gaining inspiration from new strategies. If you’ve ever looked at noteworthy brand case studies, you’ve surely seen mentions of New York men’s razor company Harry’s. So what makes Harry’s so noteworthy and how did the brand go from the new kid on the block to a multi-million dollar company in a matter of months?

Harry’s was formed in 2012 by Andy Katz-Mayfield and Jeff Raider with the goal to create a high-quality razor experience, without the exorbitant costs associated with the majority of existing players in the industry. With the increasing success of (predominantly) mail-in product services like Warby Parker and MeUndies, the duo knew they wanted to incorporate this business model within the shaving world (while producing a product that differs in quality from the likes of Dollar Shave Club). Andy and Jeff then set out to work out product production logistics and found the ideal existing high-quality razor factory all the way in Germany (which they eventually fully purchased after a few years). The factory, currently consisting of over 600 German engineers, designers, and production workers, was able to deliver the exact top-notch product that the duo was looking for.

Once the main business and production plan was set in motion, it was time to deliver a pre-launch strategy that would set the basis for the company’s success. Below, we highlight the different factors that turned the little startup into an industry giant.

The Power of Storytelling

Storytelling is a vital yet often underused aspect of marketing, and one that really helped cement Harry’s as the powerhouse it’s become. The brand had a tough feat ahead of them, trying to go head-to-head with Gillette, which at the time owned 70% of the market for razors. Everyone loves a good underdog story, and Harry’s capitalized on this fact by branding themselves as the new kids on the block that could take on the giant. A true David vs Goliath story, rebels going head-to-head with the empire, they created the perfect rootable product. Harry’s was designed to free the market from paying a ludicrous amount of money on shaving equipment, while still offering a high-quality product that couldn’t compare to Gillette’s cheaper alternatives.

To make matters easier for Harry’s, their hero fell right into place when Gillette began attacking the brand, claiming people were leaving Harry’s and switching back to using Gillette products. Harry’s saw a golden opportunity here to surge their underdog hero status and combat Gillette head-on. They began an entire paid advertising campaign debunking Gillette’s false claims, directly acknowledging the attacks and displaying direct comparisons between the two products. This is the moment the audience craves in any epic saga, the main battle between the hero and the villain, the final showdown between Luke and Vader (too many Star Wars references?).

Not only were the ads successful, but Harry’s took it a step further and created an entire landing page comparing the two products and highlighting the benefits of their brand. This included everything from category breakdowns to screenshots of tweets from real customers confirming the opposite of Gillette’s claims, and switching from the giant in favor of Harry’s.

The final hook on the landing page? Giving users the option to try out Harry’s for themselves with a cheap trial set that’s sure not to break the bank. Ultimately, Harry’s was able to take all of the negative attention being directed at their brand and use it as a means to not only increase sales, but their overall reputation.

The storytelling aspect of Harry’s marketing strategy was also able to drive a ton of organic support for the company. People loved the underdog narrative so much that they went on social media to showcase their support for the brand, while also trying to combat the corporate beast that is Gillette. Create a hero archetype and expect people to want to come to your defense.

Time to Reach Out to Some Old Friends: The Stellar Referral Program

It’s impossible to talk about Harry’s success without diving into its superb pre-launch referral program. The brand wanted to create buzz around the product and did so through mystery and with a slew of product incentives. The pre-launch site was simple and didn’t reveal too much about the product just yet. All it took was a simple picture of a razor with language hinting at “Harry’s is coming.” From a consumer perspective, this attracted people to want to sign up and learn more about this new sleek razor. The main CTA for the page was to get users to sign up to be the first to learn about the launch and details of the brand.

Upon signing up, users were then taken to a page encouraging them to invite their friends to add their emails, and the more friends they referred, the more free prizes they received. 5 referrals got you a free shaving cream, 10 got you a Truman handle with a blade, 25 a free shaving set, and 50 a one-year free supply of blades. It’s easy to see why people were driven to invite so many of their friends and colleagues — a feature that got Harry’s a total of 100,000 email sign-ups in a single week.

Let’s talk about the simplicity of this referral program. All Harry’s had to do was create an incredibly simple and cheap landing page, and the rest fell into their lap. A solid referral program makes your audience do your work for you by having them spread the word and increase brand awareness organically.

Today, there are countless examples of great referral software that can help you achieve your goals and stay organized in the process. These vary by price depending on the different functionalities you want to include, and the severity of how large you want your referral program to actually be.

Visibility was critical for the brand in its early pre-launch stages. The referral program was an excellent way to increase word-of-mouth awareness for the product, but the team didn’t stop there. In order to really tap into a wider audience, Harry’s conducted mass outreach to publications, blogs, and magazines with their product to test. Authenticity was key here, and they weren’t interested in running bling media sponsorships. The Harry’s team included personalized notes to each sender, with individuals ranging from grooming editors at magazines to podcast hosts. They drove this type of awareness without the need to spend advertising dollars and ended up receiving organic praise on the product. This led to positive reviews from the likes of GQ editors who gave the product a glowing review to podcast hosts who would be asked about their razors organically without the conversation coming off like a paid advertisement. The main prerequisite to a solid partnership for the Harry’s brand was a mutual appreciation for the product itself, which was more important to them than inauthentic advertising of the brand.

On top of mutually beneficial promotion partnerships, Harry’s massively benefited from a retail deal with Target in 2016 to sell their Harry’s products in stores.“Our brands share many of the same values,” co-founder Katz-Mayfield expressed while discussing the partnership. “For example, we both appreciate exceptional design, we’re focused on offering high-quality, affordable products and we always try to put customers first.” With Walmart’s brand-new redesigned website in 2018, they knew they wanted fresh new products to appeal to millennial consumers… enter Harry’s. The corporation partnered with Harry’s to initially sell its products in 2,200 U.S stores.

It’s important to remember that these big partnerships came about years after Harry’s initiated their early success. You have to establish yourself as a leader in your category and showcase enough potential to be able to have the big guys throw the big bucks your way, and that’s exactly what Harry’s did.

Besides perfecting a flawless shave for a low price, Harry’s also excelled in delivering a near-perfect user journey. The company gave its prospective customers different options in order to acquire them as a new business. A consumer didn’t complete their purchase? They’d shortly get a cart abandonment email reminding them to complete their purchase. But their efforts don’t end there. Harry’s offered more incentive for the end users by offering them a free trial of the product in order to decrease the initial commitment. If the free trial didn’t work, they also promoted their lowest-cost product pack for only $15. In this case, offering alternative options, even if it meant getting prospects to spend less money on their order, was the perfect way to finalize the deal to buy someone in on the product. Once the consumer was ready to make their purchase (based on any of the options they might have chosen from their email), they were then offered an upsell opportunity in order to try to increase the overall order value. For extra customization, Harry’s allowed the customers to choose their own designated shave plan during their free trial, as well as a handle color, to make the entire experience uniquely personalized.

Another big feat for Harry’s was their hyper-personalized and to-the-point advertising. If a user expressed any type of interest in the company, the ads fully acknowledged their place in the funnel process and tried to win them with very direct language. The creative in the ads offered more benefits and reasons why this interested yet not activated customer should make the switch, getting their attention with snappy language and offer-based headlines. Similar to the cart abandonment email campaigns, these ads also offered the user a trial offer to get them to fully buy into the product.

The Harry’s marketing model was something to be admired and studied, not only within the shaving industry but within all marketers and brands alike. Multiple organizations have and continue to model their digital efforts after the shaving company’s strong overall plan.

One of the biggest lessons from the work Harry’s achieved is careful consideration for every step of the marketing process. The company didn’t need a big team or a ludicrous advertising budget; what they did have was exemplary storytelling, the ability to build strong relationships, and well-thought-out strategies to drive their consumers to not only purchase their product but to promote it within their networks.

With these specifically curated tactics, the new grooming company wasn’t only able to make a dent in the industry, it was able to command it.

Saad is a strategist with 5 years of digital marketing expertise. He brings experience in managing multi-channel campaigns for varied brands like Sesame Street in Communities, The Bill & Melinda Gates Foundation and Greenpeace. Outside of work, you can find him at his local record store or aimlessly walking around the city exploring a new neighborhood. 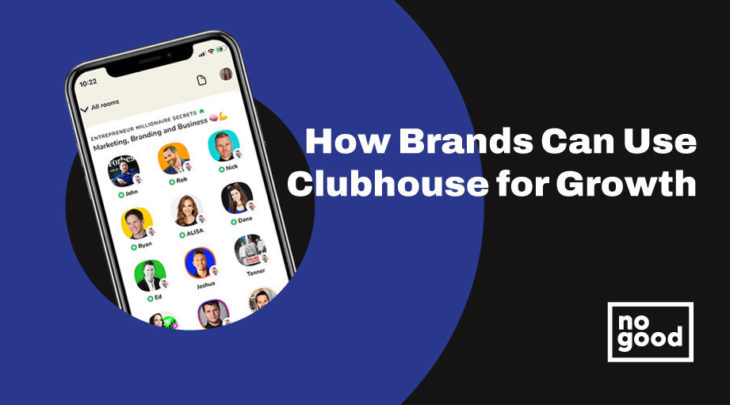 Clubhouse for Business: The Ultimate Guide for Brands

In the world of ever-growing social platforms, it’s hard to keep up. One platform among all the emerging “social networks” that you should have on your radar is Clubhouse.  Clubhouse... Engagement marketing is a buzzword that’s constantly thrown around in the marketing community. Though it’s a simple concept to grasp, many companies miss the mark and struggle to achieve real, sustainable results as they grow and scale.