Skip to Navigation
Banza’s Marketing Strategy: How The Pasta Brand Dominated The Category
Talk to us

Banza’s Marketing Strategy: How The Pasta Brand Dominated The Category

In the 2005 bestseller and business classic, Blue Ocean Strategy, authors W. Chan Kim and Renee Mauborgne define market strategies as either “Red Oceans” or “Blue Oceans.” In a Red...

In the 2005 bestseller and business classic, Blue Ocean Strategy, authors W. Chan Kim and Renee Mauborgne define market strategies as either “Red Oceans” or “Blue Oceans.” In a Red Ocean, a business enters an established market space, exploiting existing demand and striving to beat the existing competition. On the other hand, in a Blue Ocean, a company creates a new market space where competition doesn’t exist, so the challenge becomes to create and capture new demand.

Both strategies have their own pros, cons, risks, and benefits. For example, while a Red Ocean may be more competitive, a business knows that there is demand, so the challenge is differentiation. However, constant competition often results in having to drive down prices to compete, which puts somewhat of a ceiling on growth. In a Blue Ocean, while there’s a risk in seeing if you can create demand in your new category, the rewards are much greater.

When Banza launched in late 2014, they were the first to create and enter the chickpea pasta market. With a great product and robust marketing strategy, they’ve been able to dominate the space, launch distribution deals in 12,000+ stores, including Whole Foods and Target, and raise funds from some of the most prominent players in the food industry.

If creating a category was easy, everyone would do it. As mentioned, there is some risk in this strategy. There are no guarantees that you’ll be able to create demand for a product people have never heard of, let alone capture it and convince someone to buy. However, a business can still set itself up for success with smart strategy and data.

In a NY Times interview in 2016, founder Brian Rudolph said, “I couldn’t find a single person who didn’t want a healthier pasta.” While this statement by itself is a bit anecdotal, there is some data to support this.

For one, interest in gluten-free diets had been steadily rising for several years, reaching its apex in November 2013, according to Google Trends data.

Additionally, Rudolph says that he first created Banza in his kitchen while following the Slow Carb Diet, coined and popularized by Tim Ferriss in the Four Hour Body, released a few years earlier. Tim Ferriss has a famously active fanbase, so Rudolph knew he had a passionate audience he could tap into, leveraging communities like Reddit to reach potential fans.

Combine that with the fact that the average American consumes nearly 20 lbs of pasta per year, and it becomes a much safer bet that a significant population would be interested in a more healthy alternative, even if only for some of their meals.

In many ways, Banza followed in the footsteps of Chobani, who set the standard in creating a healthy alternative to an existing popular food. (Banza even joined the Chobani Incubator while getting started, where they received some valuable grant money, and even more valuable advice and guidance). Rudolph first toyed with the idea in college, when, on his path to eating healthier, he began experimenting with chickpeas, specifically in pasta. He first tested the waters with his product with a crowdfunding campaign on Venture for America. The campaign raised nearly $18,000, where it won the VFA contest worth an additional $10,000.

From there, Banza got the opportunity of a lifetime, getting featured on the CNBC reality show “Restaurant Startup,” where they ultimately convinced judge and restaurateur Joe Bastianich to invest in the company.

From there, Banza continued to rack up recognition from various entrepreneurial and innovation groups, scoring some major press wins, including Time magazine’s Top 25 Inventions of 2015, CircleUp25’s Most Innovative Consumer and Retail Brands of 2017, and CNN’s Best Products of 2018.

While PR wins are always worth celebrating (and valuable SEO backlinks), they aren’t the cure for long term success. Long-term success requires getting in front of your customers on a regular basis via multiple touchpoints.

A brand in a Red Ocean would likely accomplish this by competing in the advertising world. They’d launch campaigns across search and social, selling specific benefits of your product versus their competitors and driving users down the funnel in a way that they’re likely familiar with.

However, these tactics aren’t as turn-key for a brand in a Blue Ocean. There is only so much real estate on a text or social media ad, which makes it difficult to tell your product story in a quick and concise way.

On top of that, even if Banza were able to grab some attention with its differentiation, consumers would be understandably skeptical, and perhaps timid to try it.

Banza realized that for long-term growth, they needed to find a way for users to engage with their products, and have real people vouch for its quality and taste. That’s where influencers came in.

In the early days, Rudolph himself reached out to influencers and bloggers who he thought would be interested in his product. He then sent them personalized messages, with references to things they had made or written about, along with an invitation to try Banza. This strategy built up a great deal of momentum, where not only did Banza build up demand among consumers but also among influencers who wanted to share their own creations.

Because of the different interest segments that Banza is able to tap into, the influencer content was always able to remain fresh. Some users re-created classic Italian dishes but made them more healthy by swapping out traditional pasta for Banza. Others focused on the health element, creating dishes that showed their readers how they could re-introduce pasta to their diets and maintain their fitness goals. Others just wanted to show off their creativity.

As of 2018, Banza said they received around 30,000 pieces of user-generated content, 80% of which came from users who had never posted about Banza before. A Blue Ocean can only stay blue for so long. Once people start to see growth in a new category, competitors flock in to steal market share, competing on price, taste, or other product variations. Banza, however, had built up enough brand equity to not only stand out in their category but safely expand into new ones.

User-generated content doesn’t only help spread the word about your brand. It can also provide valuable insights about how consumers are using your product, what they like and don’t like, and what they might like to see next. After seeing post after post of Banza being used as a carb substitute in grain bowls, the next product launch became clear. In 2019, Banza released chickpea rice with three times the protein, twice the fiber, and 30% fewer net carbs than brown rice. This product was easy for customers to adopt, as not only had the market been made for chickpea as a carb alternative, but clear user signals showed they were ready for this product as well. This expansion continued in 2020 when Banza entered another carb-heavy category – frozen pizzas. This release also piggy-backed off user comfort with chickpeas, but Banza also paid attention to the creativity they saw within their UGC. That why with pizzas, they released both pre-made pies as well as plain crusts for consumers to put their own creative juices to work. Much like marketing, product creation can often be a copycat game. Where there’s demand, a smart marketer can almost always find room within a category with their playbook of strategies and tactics. It’s almost formulaic.

But there will always be a ceiling to growth in those categories. Take some notes from Banza’s marketing strategy, and look for your own blue oceans. Instead of battling your competitors at the margins, what are some areas where there is no competition? Look for those spaces that still solve problems, and it’s full steam ahead! Since Notion's re-launch in 2018, the collaborative note-taking and project management platform has surpassed over 20 million active users by staying true to their identity and tapping into their community of users to improve their product and expand globally. Keep reading our case study to learn exactly how they accomplished this 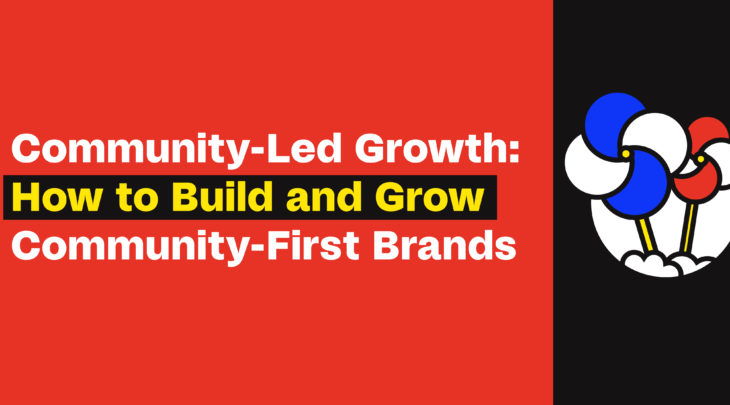 SaaS marketing looks a little different today than in years past. Read NoGood’s predictions on which SaaS marketing trends are shaking up the industry in 2022.